WHITLINGHAM: 100 up, and lots of birdsong

Two visits to Whitlingham today, one in the morning and one in the evening.  The main purpose of my first visit was to catch up with some recently arrived migrants whilst they were still singing, and this worked, with eight species of warbler.  Two of these, Garden Warbler and Lesser Whitethroat became my 99th and 100th patch species of the year, a pleasing milestone with the best part of seven months still to come.  A couple of bursts of Nightingale song and a brief flight view were enough to convince me of the need to return later in the day.

Scanning across to Thorpe I noticed a Common Sandpiper on the shingle spit, and another one was on one of the plastic rafts on the Great Broad.  Up to five have been seen in recent days, which is excellent.  A number of terns were feeding around the island, careful scanning resulted in one Arctic Tern and eight Common Terns.  There was also a large number of hirundines and Swifts all feeding low over the water in the gloomy conditions.  I spent a decent amount of time looking through them in the hope of finding a Red-rumped Swallow, without success.  As several are still in other English counties (plus one at Waxham - well done to Ben) I haven't completely given up hope of one turning up at Whitlingham.

Fast forward through the afternoon and I went back to Whitlingham to spend some time with the Nightingale.  As the evening wore on it began to call more often, and I even got a brief perched up sighting at the third time of asking.  Amazingly towards the end of one burst of song, the Nightingale was answered by another individual, singing from scrub further away but still easily audible.  I had heard this bird earlier in the evening, but put it down to ventriloquism or that the first bird had simply moved further away, but both overlapping showed that there were definitely two birds.  Hopefully they may settle down, so this will be the last time I mention them. On my way back some swallows were settling on a boat, along with a Common Sandpiper, and a swarm of Swifts swirled around the Watersports centre like a vortex. 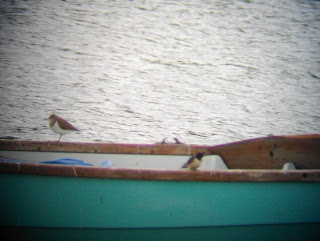 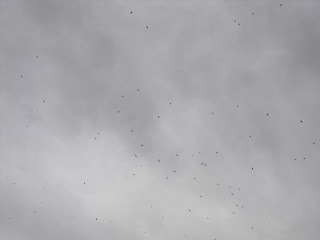