On Saturday we headed to Winterton so that I could have a look for two rare damselflies. Southern Emerald damselflies are rare but increasing immigrants to Britain, first seen in the early 2000s but seen in several years since. Scarce Blue-tailed Damselflies are found elsewhere in Britain, but had only been recorded once before in Norfolk before Simon found some at Winterton last week. The walk from the car park to the pools was further than I remembered, and with the sun beating down Cathy decided to find a place to sit and let me go on alone to look for the damselflies. When I got to the south pool there were five people there already, one of which kindly allowed me to look at a Southern Emerald through his 'scope. In total the pool held 2 male Southern Emeralds, three Emerald Damselflies, a Southern Hawker and lots of darters. With no sign of the Scarce Blue-tails I headed back to Cathy. 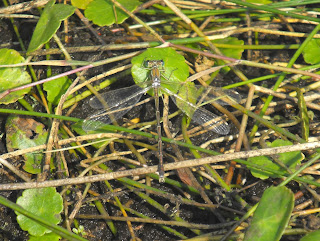 Southern Emerald Damselfly. Note the black and white pterostigma, nice bronzy bits on the thorax and the way the wings are spread out. It is known in some places as the Migrant Spreadwing.

On our way back across the dunes we were shocked by a Quail that flew out of the dunes to my left (presumably flushed by a dog, although I didn't see where it had come from). It flew across my path and landed in some scrubby heather near the fenceline. Despite getting a reasonable idea of where it had landed I couldn't find it again - not a great surprise given the species' reputation for elusiveness. There were also loads of Graylings and quite a few Small Coppers in the dunes as we went back to the car.
Posted by James Emerson