As summer draws to a close, Dad & I went to Roydon Common in search of Black Darters. It proved to be a good all-round naturalists trip. On the bird front a couple of Buzzards circled overhead, and some Crossbills called as they flew through. A Stoat ran across our path, and a we startled a Chinese Water Deer amongst some rushes. A Small Copper and lots of Speckled Woods were flying around, whilst Roesel's Bush Crickets and Common Green Grasshoppers chirruped away. I noticed an Artichoke Gall on an oak, and whilst looking at that Dad pointed out several Buff-tip caterpillars on nearby leaves. Finally after seeing loads of Common and Ruddy Darters, we located an immature male Black Darter, a species I have wanted to see for some time (thanks to Paul W for his help with directions). 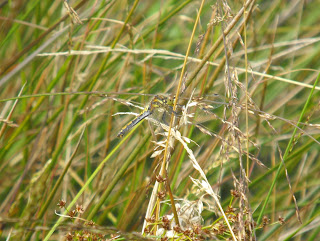 After an excellent roast lunch at the Ffolkes Arms (sic) at Hillington, we headed north to have a look at the new paths at Titchwell. We popped into the Island Mere hide, where several Black-tailed Godwits and Ruff were really close to the hide (if I had been a birder from 200 years ago I reckon I could definitely have bagged them wt ye crossbowe). A Peregrine flew east over the main path. We had a look over the new pool, named Patsy's Pool after Patsy Cline*, a female Red-crested Pochard and four Little Grebes being the pick of the birds. Continuing round we arrived at Titchwell's East Bank, and looked back over the freshmarsh. A single Spoonbill had emerged (the flock of 21 had been spooked off before we arrived apparently). It was all very nice, hopefully I shall be back here to see something rare in the near future!

* This may not be true.
Posted by James Emerson