Sunday saw a meeting of the Norfolk Fungus Study Group at Mousehold Heath. The dry weather meant that the overall total was low, but there were still several species of interest. A pale cup fungus growing on recently burnt wood could only be IDd to genus (Peziza), but the undoubted prize find was made by Neil near the end of the foray. A series of shiny black lumps on a singed birch trunk represent the first Norfolk record of Daldinia loculata, subject to confirmation from experts at Kew Gardens. 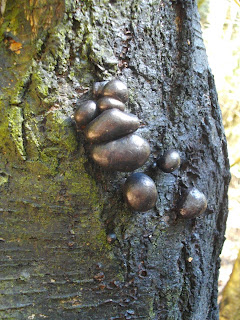