With some good Northerly winds the previous afternoon, I crossed my fingers that a seabird had been blown inland and ended up at Whitlingham. With the exception of a few seaducks I haven't heard of any Skuas etc ever being seen there (although I have read of Arctic Skua, Fulmar and Kittiwake being seen rather vaguely in "Norwich") - but is this an accurate reflection of the absence of seabirds, or of the tendency for inland birders to flood to the coast when the winds swing round?

There didn't appear to be anything unusual on the broad or across the river at Thorpe, and in fact the only bird of interest was a drake Pochard in the conservation area. I thought at the time that this was unusual in August, but having checked it doesn't appear to be so - I also saw Pochard in August 2007 and 2010. The brambles along the riverbank were teaming with insects, including a Silver Y and a photogenic Brown Hawker, whilst a Red Admiral caterpillar was munching on some nettles. 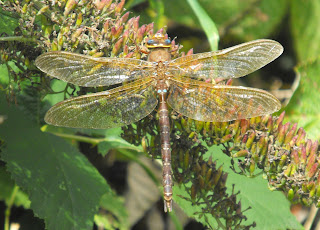 The walk back was good, seeing two of my favourite birds. Firstly a Goldcrest feeding with the tit flock along the edge of the Little Broad showed brilliantly but constantly evaded my camera, and then further down the lane at Trowse Meadows a Kingfisher flew upstream. 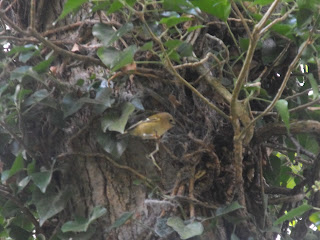