NORTH NORFOLK: The Waxwings have arrived

A third (and final!) visit to St Andrew's car park in the city once again failed to produce any Ring Ouzels, and the cathedral Black Redstart was also notable only by it's absence. In the afternoon we went for a drive along the North Norfolk coast, calling in at Burnham Overy. Here by the side of the car park were two Waxwings and a large flock of Starlings and Fieldfares. We watched the Waxwings for a while until a Sparrowhawk put up the thrushes. The Waxwings trilled to each other, then three more piped in from deep within the hawthorns, and all five flew off towards some nearby houses. We continued on to Titchwell for a drink, before heading back via Choseley and Docking. 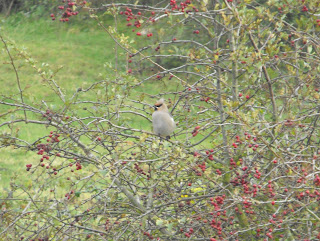