This week has seen the arrival of a number of flocks of Pink-footed Geese, so today's target was to catch up with one of these flocks over Whitlingham. I was also keeping an ear out for Bearded Tits, as there seem to be large numbers at Strumpshaw, which may mean there is an irruption at some point in the autumn. This was rather over-optimistic, but if any Bearded Tits are reading this, just look at that lovely reedmace! 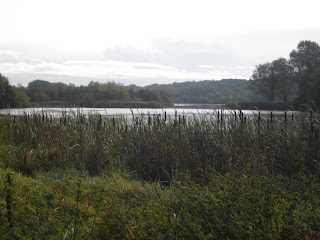 As I worked my way round a few Redwings were flying over, as well as some frustratingly unidentified finch sp. Near the path to the bird screen a Water Rail squealed, to the equal surprise of myself and a nearby Mute Swan. A lone Teal was in the conservation area along with 17 Gadwall and around 30 Tufted Ducks. With no other birds of note on the broad I headed into the woods, finding some aptly named Verdigris Agarics*. 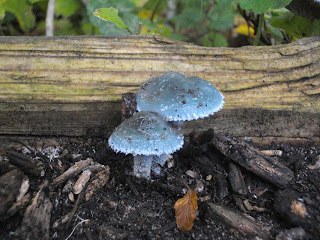 * Verdigris, for those who haven't come across it, is the bluey-green colour that occurs when copper tarnishes.