This week has been rather frustrating for the most part. There were amazing influxes of birds on Monday and Tuesday at the coast, with the winds changing mid-week. Excited birders told of unforgettable scenes and best days in the field. Back in Norwich, a few more Redwings than normal flew over.

Fast forward to Friday, and it seemed that many of the birds that had arrived earlier in the week were beginning to filter inland. On my way to work hundreds of Redwings were flying over in small groups, whilst a couple of flocks of Fieldfares were also mixed in. I wondered to myself whether any Ring Ouzels or Black Redstarts would be found close by. At lunchtime I noticed that two Ring Ouzels had been found in the city centre, of all places, so I went for a look after work. Despite a large number of Blackbirds (15+) still feeding near St Andrew's car park, there was no sign of the Ouzels.

On Saturday I had planned to go to the North Norfolk coast, but the regular waves of rain and hail against the windows made me think this was a bad idea. Instead I waited for a brief gap in the rain and went for a walk around Norwich looking for migrants. A Kingfisher on a post near Bishop's Bridge was nice to see, but I didn't see anything else of note between here and St Andrew's, although I thought I heard a Black Redstart calling unseen from near the cathedral cloisters. Spending a bit more time near the car park it was evident that the Ring Ouzels had gone, so I went home via various berry bushes.

Later on I noticed that a Black Redstart had been seen this morning at the cathedral! Darn it. As I live close by I headed back to check out the area where I thought I had heard one earlier. As luck would have it, the Black Redstart flew in front of me, perching on a small wooden post, before flying to the ground to feed in the leaf litter. I watched it for around 20 minutes, sometimes down to a few feet, as it fed and flicked it's tail. On my home the Kingfisher had returned to the same post that I saw it on earlier. It looked up at me on the bridge then flew downriver. An excellent end to British summer time (put your clocks back tonight!). 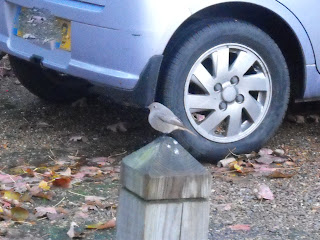