It actually felt like finding a decent bird was a possibility today, with some autumnal weather and the calls of Skylarks and Redwings passing overhead. On the Little Broad a female Wigeon was close in, having presumably only just woken up. I head three Water Rails making their weird squealing noise (two near the Little Broad and one on the north shore of the Great Broad). Five Cetti's Warblers were giving a mixture of song and sub-song. Numbers of Tufted Duck and Gadwall were similar to the previous week, but the number of wild-type Mallard was up, presumably migrants. A couple of Little Grebes were also seen for the first time since the spring. Whilst scanning from the bird screen, I found a Siskin in an Alder with the tit flock, and heard several others nearby. On the walk back a Green Woodpecker flew up off the meadows and into an oak tree. 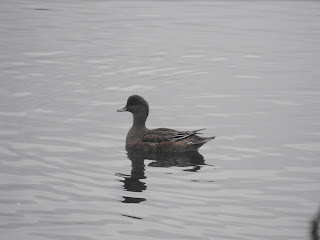