My last day of the holidays, and I took up Paul Newport's invitation to check out some Breckland sites. We started early and after a couple of brief stop-offs we reached our starting point. We then spent the morning doing a circuit of the area, in places making use of bits of two long-distance footpaths, the Eastern Pingo Trail and The Peddar's Way. An enjoyable day's birding was sound-tracked by the now numerous Chiffchaffs, with good views of birds such as drumming Great-spotted Woodpeckers, several Marsh Tits, Bullfinches, Treecreepers and Nuthatches. A calling Golden Pheasant stayed frustratingly out of sight deep within cover. In terms of migrants, a Swallow was all we had for most of the day, until a House Martin flew across the fields as we were preparing to leave.

Non-avian sightings included Red, Roe and Muntjac Deer, Brimstone butterfly, Orange Underwing moth and some Scarlet Elf Cups. We also saw this rather nice moss, which I may eventually put a name to. 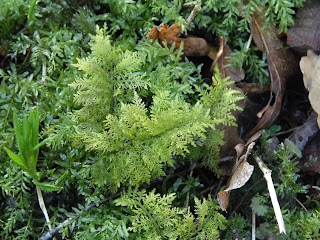 [Edit] Thanks to the wonders of the internet, I have been told that this is Common Tamarisk Moss.