There was a large passage of Arctic Terns throughout the day, and so it came as no particular surprise to find out that some had been seen at Whitlingham. What was a surprise however was the amount, with up to 18 being seen. This is the largest number there that I can remember, although I haven't gone through the Bird & Mammal reports to check this yet. Last year the main passage was on 24th April, when I saw 4 Arctic Terns and 7+ Common Terns, but this year all of the birds I saw were Arctic - in fact a Common Tern would have been my earliest patch record as I usually see them in the fourth week of April: 2008 (23rd), 2010 (25th), 2011 (21st) and 2012 (24th).

Arriving at Whitlingham in bright sunshine I saw some Swallows flying over the Great Broad, and picked up my first patch House Martin into the bargain. A double check for anything rarer (Red-rumped Swallow in Kessingland and several Alpine Swifts were seen today) came up empty. Scanning down the broad I saw some Terns, all east of the island. Reaching them I positioned myself in a gap in the willows so that I could scan without standing out. I counted 16 Arctic Terns, and got some excellent views as they flew back and forth, stalling and swooping to catch insects just over the waters surface. 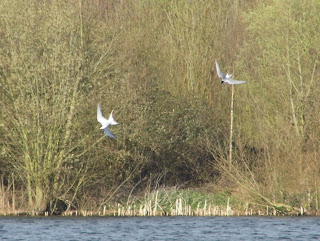 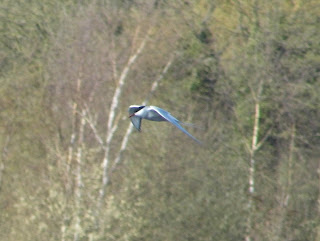