Well it's finally spring, traditionally the most bird-filled time to be at Whitlingham and the most likely to turn up an interesting species of non-wildfowl. Standing in the car park I heard Swifts (90), and looking up saw a small flock flying against the grey cloud. Walking through towards the broads I heard my first Reed Warbler (91) of the year singing from the hedge along the gas compound. I kept listening out for warblers as I walked along the north shore, stopping to see a Bullfinch at the top of one of the willows. 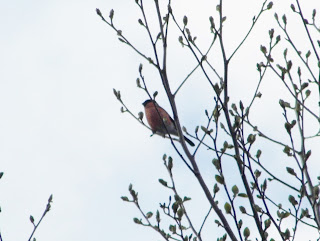 Further along I decided to make an effort to see a Cetti's Warbler, having only heard them so far this year. After a short vigil by the riverbank I did manage to get some rubbish views of one in the bramble scrub (92). Further along I saw the first of at least six Whitethroats (93). Further round and a scan of Thorpe Marsh didn't add anything, so I continued round to the south shore. Here I met Simon whilst scanning a couple of Terns, at least one of which was a Common Tern (94). He told me that he had seen a Wheatear at Thorpe earlier in the day. Being a species that I haven't seen locally I went to the woodland car park to scan across in the hope that it would be visible. Despite trying several different viewpoints (all obscurred to a certain extent by trees) there was no sign of the Wheatear.

So, six more birds until the patch hundred - I'm guessing Common Sandpiper, Cuckoo, Gropper, Garden Warbler, Lesser Whitethroat and Marsh Harrier are the most likely. Of course a Wheatear or something new would be even better... 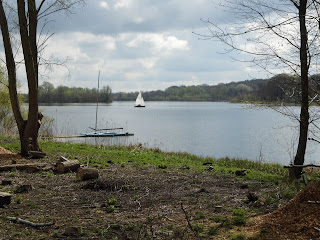 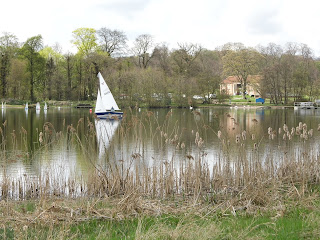 Everything looks better with a yacht