A trip to Thorpe Marsh this morning, and reaching the bridge the unfamiliar but welcome sound of a Chiffchaff reached my ears. The water level on the scrape looked too high for smaller waders, and the only birds on the water were some Teal. A second Chiffchaff sung from near the railway line and a couple of Lesser Redpoll flew over. The only bird of note on the marsh was a Reed Bunting, one of several around the site today.

Scanning from the bird screen I couldn't see anything on the spit, but I heard a Green Sandpiper nearby so I decided to walk to the end of viewing area at the edge of the broad and have a look around. Carefully scanning the shingle broad edge I found a Little Ringed Plover, and later a second bird also emerged. Some loud calling behind me drew attention to a Water Rail out in the open. After turning my attention back to the Little Ringed Plovers I re-scanned the spit, finding a Green Sandpiper. A second Green Sand flew up from the broad and towards the edge of the river. A Sand Martin flew past my head, and soon after it was joined by four more, swooping and chattering before continuing on their journey. All in all a very successful morning, and it did actually feel a bit like spring! 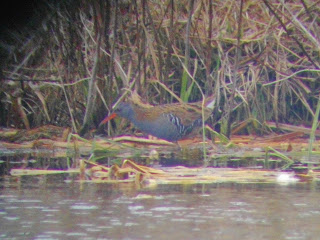 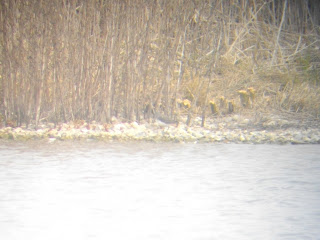 Despite appearances, this Green Sandpiper did have a head 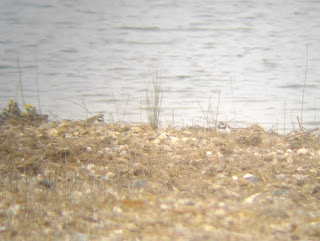 On the way back I noticed a small white flower which looks like either Common Whitlowgrass or Hairy Whitlowgrass, both of which would be new for me. 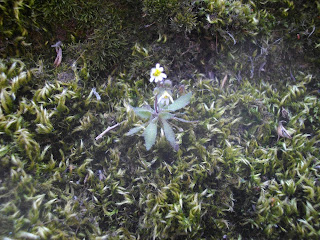 [A good day locally: also in Norwich today - A Red Kite flew over Thorpe later in the day, a Common Sandpiper was at Marston Marsh, a Med Gull flew over Eaton Park and a Spotted Redshank was at Bowthorpe Marsh]
Posted by James Emerson