Adam & I took the bus to Rockland St Mary for a look around and then a walk back to Whitlingham via the Wherryman's Way footpath. It's a walk we have done in spring several times before, and usually picks us up a few spring migrants, although this year we weren't so confident.

Our first point of interest was at Rockland staithe, where there are some allotments. Some Fieldfares were immediately obvious, along with some Linnet and commoner stuff. We then walked along the path to the bird hide and looked out over Rockland Broad. Five pairs of Great-crested Grebes were present, one of them displaying. There were also single pairs of Tufted Ducks and Gadwall, and a Marsh Harrier flew over. With  little else around we retraced our steps back to the road, where Adam noticed a Wood Duck in a front garden. In fact there was a pair, and a pair of a south American duck (Ringed Teal?) on a small pond. 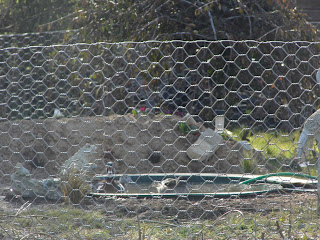 We followed the footpath up over the fields and along the edge of Wheatfen. A large flock of Linnets and some Skylarks were on some farmland, and a pair of Brown Hares and a Chinese Water Deer were further over. Reaching some grassier paddocks we found a mixed flock of Starlings, Redwings and Fieldfares, some of which flew up into the roadside trees. As we reached Surlingham a Marsh Tit was feeding in a garden along the covey road.

Next up on the south Yare tour was Surlingham Church Marsh. We walked up to the Ferry House pub and then along the river, spooking a couple more Chinese Water Deer. Continuing to the bird hide we saw some Teal, Tufted Ducks, Gadwall and Canada Geese, before re-tracing our steps and taking the path inland to check for Little Owls. No Owls in view, so after double-checking from the ruins we carried on towards the church. Several Red-legged Partridges ran across our path and into the woods, and a pair of Coal Tits called from the conifer tops.

The next leg of the journey took us towards Bramerton. Before we arrived we scanned across the marshes from a high point on the footpath, and picked out Curlew, Green Sandpiper and Shoveler on some flooded pools. Carrying on past the Woods End, we went across the farmland  towards Whitlingham sewage works. Here we were surprised to see 84 Lapwings on the fields (a couple of pairs sometimes breed near here, but the large number is unusual). 83 were in a group, whilst one had been ostracised. 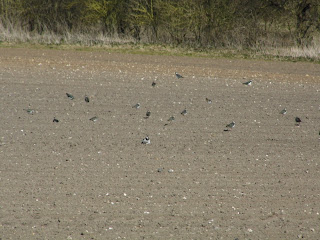 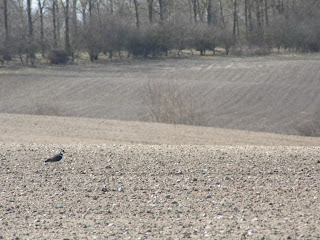 A pair of Oystercatchers and a Herring Gull were the only birds of note at the sewage works before we went along the edge of Whitlingham Marsh. Some ducks, probably Teal, spooked up from the flooded woods, drawing our attention to a Water Rail running in comedy fashion. Looking over the river a Sparrowhawk flew up from behind the trees and soared over Thorpe Marsh. Whitlingham was busy and there was still little to suggest that summer had arrived.
Posted by James Emerson