On Sunday afternoon Cathy & I decided to go for a walk, but without a destination in mind I chose a site from my 'I should really go and have a look around there at some point' list. That site was Whitwell Common, a SSSI near Reepham. We parked up at the small pull in near one of the entrances to the common and had a look at the map on one of several professional-looking display boards. Despite being nominally a common we read that there was no specific public rights of way, but there was a permissive circular trail that was regularly cut. As it turned out, this was the most sensible route anyway as much of the site was quite wet. 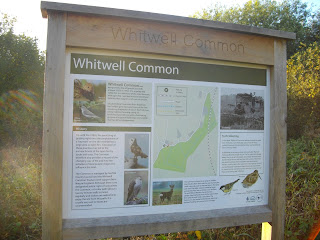 There are quite a few fungus records for Whitwell Common, including Crimson Waxcap, but I didn't notice any grassland fungi, or indeed any dry grassland areas where they would normally grow. I did notice some Giant Horsetail growing in an area of wet woodland between a path and the road. This large version of the commoner horsetails is rather scarce in Norfolk - I had only seen it once before. As we emerged from the wooded area I raised my arm to shield my eyes from the sun, and within seconds a Common Darter dragonfly had landed on my hand. It flew up and returned briefly, before relocating to a nearby branch. This was a very satisfying feeling, somehow connecting with the landscape. 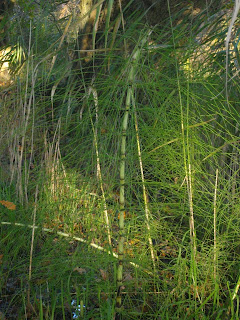 After walking through some wet reedbed areas we crossed a ditch into the woodland. On our left hand side was a small river (I'm not sure which one, but I think it is a tributary of the River Ainse). We saw some bright-pink seeded Spindle trees, but not much else of note until we were almost back at the road, where there was a flush of fungi. I heard a Treecreeper calling, and spotted it working its way up a nearby Oak. This was a nice site, and I'm sure in the spring there would be many more things of interest to look for. 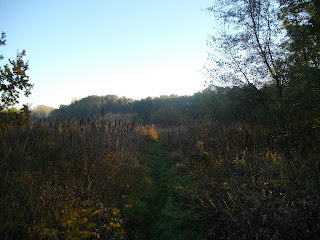