WHITLINGHAM: After the cold snap

Following a mild start to the autumn it came as a bit of a surprise that the forecast snow actually fell on Norwich on Saturday evening. By Sunday morning much of it had melted, but the cold snap and the strong winds battering the coast persuaded me to head down to Whitlingham just in case a Little Auk had flown this far inland. It doesn't happen very often here, although much further inland Graffham held Long-tailed Duck, Great Skua, Kittiwake and Arctic Tern as a reminder of the possibilities.

I had a good look around the slipway for the Goosander, but it seemed to be absent. Quite a few Black-headed Gulls were perched up on the solar boat dock, all lacking colour rings. I didn't attempt to do any counts, but there looked like there was more Tufted Ducks than last week, and probably a few more Pochard too. A couple of Goldeneyes were also on the Great Broad, but as there have been up to five at Thorpe recently these are probably commuting between the two. A drake Shoveler was the first I've seen here this winter period (there were probably two females too, but visibility was poor). 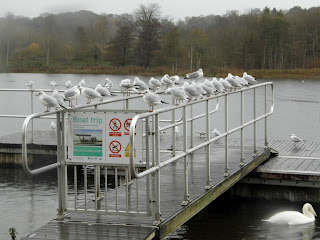 By now it had begun to rain steadily, so I decided to loop around through part of the woods and back around the picnic meadow. I heard some Goldcrests calling and watched three of them feeding close by, never staying still enough to get an in-focus photo. There was still some fungi growing, including Brittle Cinder (Kretschmaria deusta) and Split Gill (Schizophyllum commune). The former wasn't a Whitlingham tick by virtue of some seen at Trowse Woods last year, but the latter was new. 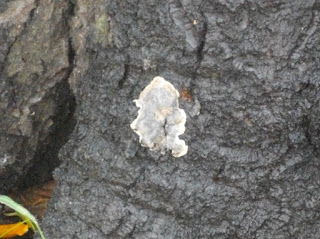