On Sunday I attended a heathland lichen workshop organised by the Breaking New Ground project and NBIS. We spent the morning at Thetford Warren, now firmly in Norfolk, but part of the Watsonian Vice County of West Suffolk. The main group of lichens that we were looking at were Cladonias. These are mostly green or greenish grey, and are the ones sometimes colloquially referred to as 'Pixie Cups'.

In a couple of hours we saw seven different Cladonia lichens, taking time to examine each for critical features and in some cases to compare against similar species. This was particularly useful, and I'll definitely be trying to identify some for myself based on what we were shown. Unsurprisingly six of the seven were new species for me. 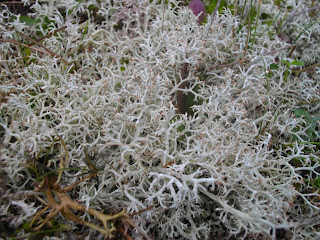 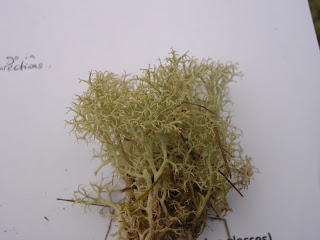 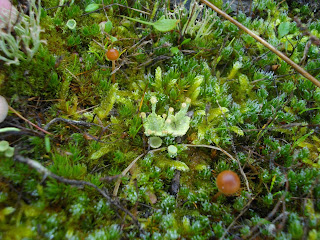 
Near the car park lots of fungi had been left, presumably remnants of nearby forays. Whilst looking for lichens we did see quite a bit more. In particular Moor Clubs were common and a new species for me. Some Common Bird's-nests meant that I have seen all three of the regularly found bird's-nest fungi in the past month. What might have been the most interesting fungus was some tiny yellow stalked blobs growing on moss, which several knowledgeable mycologists agree "looks interesting", but as yet nobody can name it. 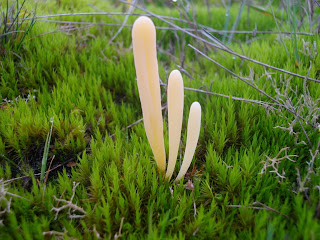 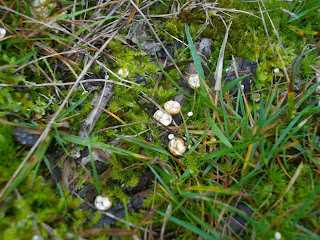 As well as the lichens and fungi there were still some plants in flower, including the tiny Bird's-foot, which I have only seen on one occasion prior to this. After a productive morning session, we then stopped for lunch before moving on to Weeting Heath for the afternoon. 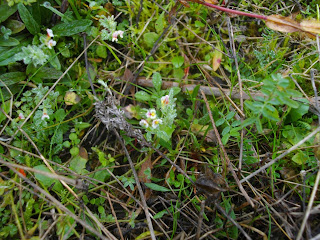