CENTRAL NORFOLK: Fungi on the Lizard

My weekends are currently being mostly spent decorating, but I did head out on Saturday morning to attend a fungus study group foray at The Lizard on the outskirts of Wymondham (not to be confused with the more scenic and wildlife-filled Lizard peninsula in Cornwall). As it was for the couple of hours I was there we spent most of the time in an area of pools and wet woodland alongside the A47, which I don't think is technically part of the Lizard, but I don't know if it has a 'proper' name.

A quick look along the lane leading to the parking area had turned up zero fungi, so as we met my expectations had been tuned down a notch. This was soon dismiseed however, as a short way in we found a clearing covered in Jellybabies (the fungus not the sweet). Wrinkled Club was also numerous, and several other species were seen including a new one for me, Scurfy Deceiver. 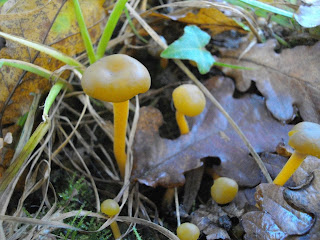 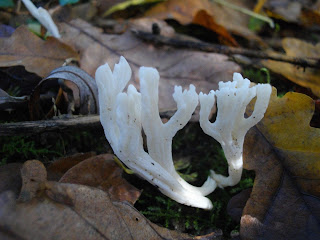 Wrinkled Club - not usually as branched as this

Clambering over some wood we reached a pool, and found one species of Tricholoma to be particularly common. The combination of brownish scaly cap, a small ring and growing with Willows identified it as Girdled Knight, another new one, so the trip was already worth making. 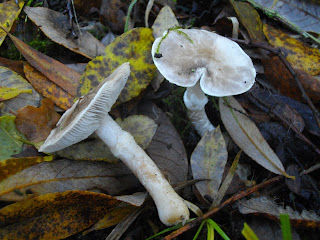 Emerging into an open grassy area, we saw Silky Pinkgill and Galerina laevis, the latter confirmed at home by Yvonne. It had been a cold night previously, and out of the sun more Girdled Knights were covered in frost. Heading through some scrub Alex noticed some small Scaly Fibrecaps growing along the path edge, whilst Neil found a huge Earthball. Also in this area I found some Toad's Ear and a Hawthorn Shieldbug. 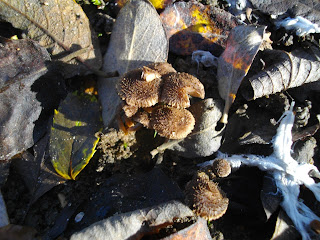 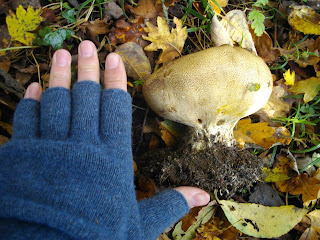 We took a path into an area of thorny trees, and I was excited to see a large purple trumpet-like fungus, only to find that it was actually a very large and deformed Amethyst Deceiver. After looking at a few Mycena it was time for me to head off and do some painting, but I was buoyed by the knowledge that I'd seen at least five new species - quite a productive morning. 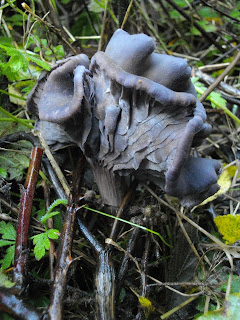 It was more purple in real life!