On Friday evening news emerged on Twitter of two very rare birds - a Cliff Swallow at Minsmere and an Eyebrowed Thrush in Northumberland. The thrush looked particularly nice, but I had no intention of going that far. The Cliff Swallow on the otherhand was tempting - Minsmere is just as close to get to as Titchwell, and there hadn't been any previous East Anglian records, so there was no imminent sign of one turning up in Norfolk. I hadn't made up my mind when I received a message from Andy Musgrove, who was going and had space in his car. This was the spur I needed to decide to go and have a look.

The Cliff Swallow had been seen going to roost in the reedbed, so we left early in the hope that we would see it shortly after leaving the roost. As it was we arrived and were told that it had flown south with seven Swallows about ten minutes earlier. Undiscouraged we waited, and it wasn't long until a group of hirundines returned. There was a brief period where we could clearly see eight Swallow spp at a distance but not make out which was the Cliff Swallow, but luckily they flew right past us, and the pale rump and distinctive shape stood out.

I had been prepared for flight views only, but the dull weather was probably poor for feeding, and the flock settled in a small tree between the Sand Martin cliff and the north wall. We obtained excellent views, both perched and in flight, although the Cliff Swallow was often facing the opposite direction to the swallows. I took a few record shots, the first one in poor light and the latter with the Cliff Swallow (the bird of the left) looking away from us. Still, there were lots of birders there, so if you want to see a better photo I'm sure you can track one down on one of the other blogs linked on the right hand panel. A flock of five Bewick's Swans flew over whilst we were watching the Swallows. 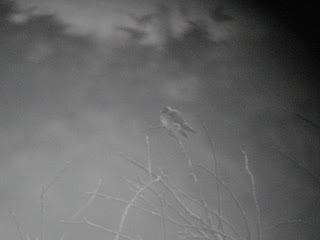 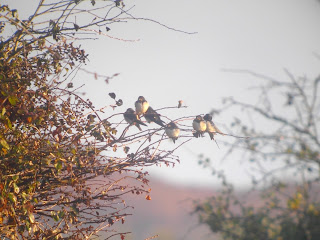 Nb. These photos are "record shots" - not very sharp or good colour, but if you enlarge or squint you can make out what the bird is, just. Some pseudo-modest photographers insist that their otherwise pin sharp flight shot taken with £5000+ worth of equipment is only a record shot because a bee flew through the bottom corner of the shot. They are mistaken.

After a while we decied to do a lap of the reserve. We saw a couple of Stonechats along the path, and Andy swept an interestingly-shaped spider called Cyclosa conica from the vegetation. There was quite a bit of fungi about in the short grassland, including Hairy Parachute, False Chanterelle and a couple of different yellow spindle types. Near the sluice we had a closer look at the Tamarisk, and I was shown a Tamarsik-specialist bug called Tuponia brevirostris. On the way back round we also saw a Musk Mallow specialist Weevil, Aspidapion soror. A final delight came in the form of a spider with the English name 'Marsh Knobhead'. In the interests of accuracy an ecologist pointed out that a rare confusion species for the spider does also occur at Minsmere, which although usually not overwintering, could do this year because of the warm weather. So technically it is a probable Marsh Knobhead. 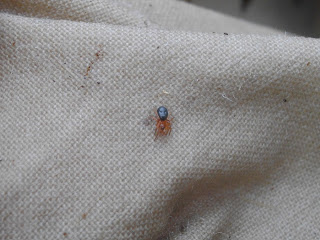 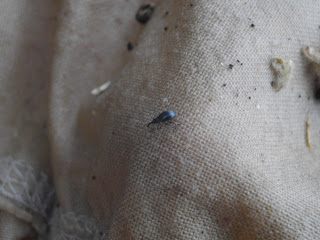 On the way home we were near Hempnall when Mike said that the fields looked good for Golden Plover. Less than a minute later we saw a small flock of Golden Plover. Hopefully these predictive powers can be put to better use with a rarer species at some point. Thanks to Andy for driving, and also to the staff at Minsmere, who have now had to cope with several big twitches this year and have coped admirably.
Posted by James Emerson