On Saturday Cathy & I joined Gary and Alysia for an early-January bird race day. We departed from Norwich at about 05:50, and arrived at Titchwell at 07:00, still in darkness. As we walked carefully down the main path we saw our first birds of the year, Woodpigeons roosting near the café. A Robin ran along the path and was confirmed after some squinting through binoculars.

We made our way to the Parrinder Hide and settled in to wait for the light to improve. The most obvious birds were those that were large, close, noisy or pale-coloured, which accounted for things like Greylag, Teal and Shelduck. We were surprised by the large numbers of Goldeneye, and also saw a few Pintail further back. In terms of waders there was a Knot, some Ruff, Dunlin and Black-tailed Godwit, whilst some Curlew flew over. Starlings began to leave their roost amongst the reeds, and a Marsh Harrier flew into view.

Once the light was good enough to confirm that we had seen as much as possible we checked the mud on the other side, adding Grey Plover and Redshank. Walking down the path to the tidal area of marsh we got close views of some Little Grebes, plus a Spotted Redshank and Bar-tailed Godwit. Cathy pointed out a Water Rail, which worked its way aloing the edge of a muddy island before swimming to the near bank.

The tide was out, so we walked towards the shoreline, stopping to watch a Glaucous Gull flying west towards Thornham. A moribund Pink-footed Goose was a sad sight, but enabled us to get a close up view of the serated mandibles – not far off those toothed birds that used to be on Rhubard & Custard. There were lots of Oystercatchers and Brent Geese about, with Sanderlings, Turnstones and Ringed Plovers thrown in. The seaduck numbers off Titchwell have been impressive this winter, and we were not disappointed here. Several flocks of Long-tailed Ducks were present, including one close flock, plus lots of Common Scoters, a scattering of Velvet Scoter, an Eider and a few Red-breasted Mergansers. It was too foggy to see to the horizon, but we did manage to see a Red-throated Diver going eastwards. 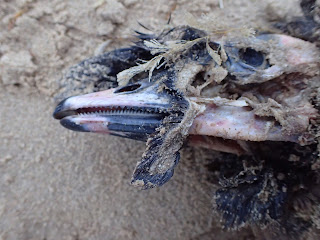 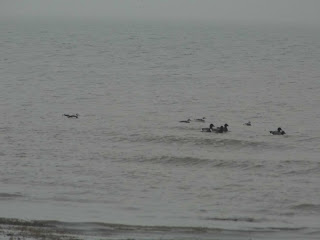 Heading back towards the meadow trail Alysia noticed a Stonechat on some fenceposts and Cathy found a Cetti’s Warbler working its way along the base of some reeds. After hearing them earlier we saw Reed Buntings and Snipe, and Gary picked out a Water Pipit on the drained pool to the west of the path. Patsys Pool held Gadwall, Tufted Duck and Coot, and a female Bullfinch showed nearby. We stopped at the feeders to look for some passerines, the highlights of which were Brambling, Greenfinch and Lesser Redpoll, Gary hearing the latter fly into the tops of the trees, where they showed briefly before flying across towards the car park. A Feral Pigeon was the last bird before we left, having seen a respectable 70 species.

Next up was a trip to Thornham harbour, where a group of birders were watching the Twite flock. About 25 birds were present and showing quite close, before flying up to the coal barn. We also saw a Rock Pipit before heading off to have a look around the Choseley area. There wasn’t much around the barns except Red-legged Partridges, but we did see a Yellowhammer and Stock Dove at a farm nearby. Further along the coast we stopped for another scan, and I spotted my highlight of the day, a hunting Short-eared Owl. It worked its way back and forth over some rough grass, before dropping down on some prey. It immediately lowered its wings over it in a threat posture, which seemed an over-reaction up until the point a Kestrel flew in and stole the prey. 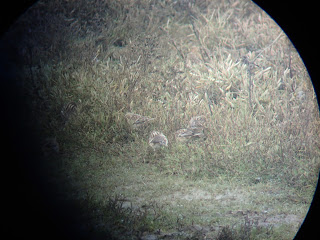 Next up were two stops to look over the coastal strip between Gun Hill and Holkham. Egyptian Geese and Grey Partridges were close by, whilst four Lapland Buntings flew over heading towards the dunes. A Fieldfare and a Mistle Thrush called from hedgerows, and a flock of Golden Plover flew up. Closer to Holkham a Great White Egret showed from the neck up, whilst White-fronted Goose and Grey Heron were also added. We were short of woodland birds, so a walk in Holkham Park was in order, and Great-spotted Woodpecker, Nuthatch and Treecreeper were duly noted. By now Cathy wasn’t feeling well, and it was already apparent that we would struggle to fulfill our intended route.

Next up was Salthouse, and after a walk out to Gramborough Hill we saw a flock of around 30 Snow Buntings, along with several Guillemots offshore. We had just arrived back at the car when the Wigeon near the roadside flew up. Gary said “Peregrine”, but for some reason we all ignored him, thinking it was just a sort of “a Peregrine might have put those up” sort of comment. A moment later he asked why none of us were watching the Peregrine that was powering through the flock, and luckily there was enough time for us to get on it before it flew west towards Cley.

Along the coast we arrived at Sheringham, and set off to look for Purple Sandpipers. Unfortunately it was high tide and they were out of sight. We enjoyed watching the Turnstones, and added Pied Wagtail and House Sparrow, but by now there wasn’t much time or light left. On the way back we saw Red Kite, my 107th and final bird of the day.
Posted by James Emerson