I had to nip out to get some shopping, and decided to visit Whitlingham first. The Scaup had been reported from the south-eastern corner of the broad earlier in the day, so I decided to concentrate my time on the area east of the broad. After a bit of scanning I picked out the Scaup, looking a bit further along in moult than when I’d first found it (it now has a much reduced amount of white around the bill, plus a couple of pale areas on the back). Whilst waiting for it to resurface I noticed another Scaup! It took a moment to sink in, but this bird was clearly much further along, with a greenish tinge and over half the back now grey. It also had a big white patch on the flanks.

At this point Gary walked up from the eastern end of the broad and asked what I was looking at. I said Scaup, but that there was two. He said that there must be, because he had been watching one at the east end. I hadn’t noticed any birds flying in from that part of the broad, and having showed him ‘my’ two, Gary said that the bird he had seen was at a different stage of moult to these ones, so there must have been three separate 1st-winter Scaup present! I didn’t have time to go and look for the third bird, but was quite happy with two.

I have put photos up of the two birds I saw – I would be interested to see any photos that people have taken of the Scaup at Whitlingham since Christmas to see whether either of the further along birds were present earlier but mistaken for the original bird. The most likely option would seem to be that the others arrived with the bad weather on 1st Jan or overnight. 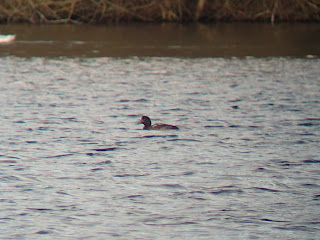 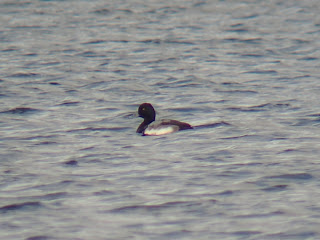