Last week I had received an email from Mark Joy, a wildlife enthusiast and photographer from Lincolnshire. He has been putting a lot of time and effort into photographing fungi recently, and had spent a couple of days at Holme Dunes checking rabbit droppings for Poronia erici, the fungus that Cathy & searched for after Christmas. All of his hard work had paid off when he found pellets with the fungus on in three locations along the dunes, and he very kindly sent me directions on how to find them.

When I left Norwich it was a bright sunny day, although the frost was harsh and reminded me of our earlier trip. Arriving at the visitors centre I had a chat with Gary and Rob, who had both seen the Poronia at two of Mark’s locations, so Rob headed off with me to speed up the finding process. He soon located a lone rabbit pellet with two Poronia erici fruiting bodies by the side of the path, along with some Winter Stalkballs. I diverted up to look over the Broadwater for the Ferruginous Duck that is present at the moment, but it was out of sight and the bright sunlight meant checking the ducks was almost impossible. 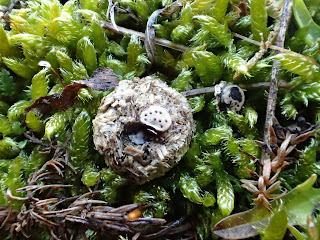 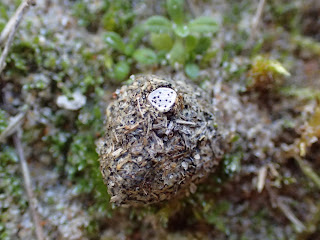 We moved on to the second area, where a location photo and some marker sticks from Mark helped locate the pellet in question. Nearby Andy Brown was seawatching, and came over to have a look at the Poronia. Before heading back I returned to the Broadwater, and despite Andy bringing his ‘scope over there was still no sign of the Ferruginous Duck. There was still one site left to check out, and Gary & Rob hadn’t managed to locate this one. Looking around I eventually figured out that it was left of the path from the car park, and found Mark’s pine cone markers. This pellet was the most impressive of the three, with multiple fruiting bodies on it. 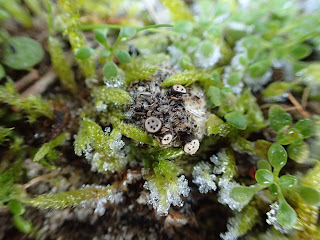 I’m particularly grateful to Mark for his hard work and directions, and also to Rob for speeding up the hunt by showing me two of the locations.
Posted by James Emerson