Sunday was another grey and drizzly day, but I decided to head out for a walk in the afternoon. Whitlingham is now out of reasonable walking distance, so I decided to give Catton Park a look, mainly just to check how long it would take to get there.

I was pleasantly surprised to find that Catton Park is less than 15 minutes away, so I dare say I shall be making fairly regular visits once the days lengthen. The main area of parkland was fairly busy with joggers and dog walkers, so I kept mainly to the woodland fringe along the south-eastern edge. I saw a range of common woodland species, whilst a Treecreeper and a Nuthatch both called unseen. Equally pleasing was the look of some horse paddocks between the woodland and road, which will hopefully tempt Yellow Wagtails or Wheatear on passage (although probably won’t).

Despite a few hard frosts there was quite a bit of fungi about in the woods, with 16 species recorded. Of these two were of particular interest, Common Bird’s-nest, reasonably common but a nice species to see, and Fenugreek Stalkball, which I had only seen once previously. A ten minute wander across the parkland highlighted a promising woodland edge area (8 Blackbirds and 2 Song Thrushes feeding) and reminded me of some of the big old trees that may hold some good insects.
I returned home satisfied that I had a good local area for wildlife walks, even though the number of bird species is likely to be rather modest. 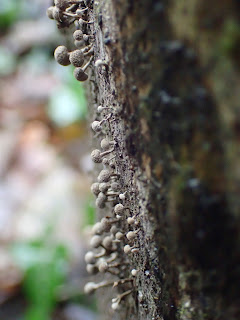 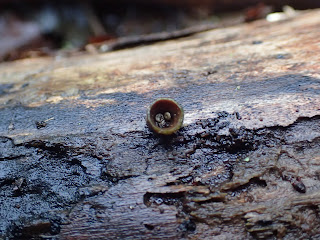