WHITLINGHAM: A rainy start to 2017

The first day of the year was a rainy one, which wasn’t very conducive to birding. Blue Tit was my first bird of the year, seen from the window of our friends in Badersfield where we had stayed the night. We saw another ten species before arriving home, the best of which was a Jay. Despite the weather I wanted to get down to Whitlingham for a look around, and as expected we picked up a range of common wildfowl. I looked for the Scaup without success, but given the combination of rain-lashed glasses and optics and spread-out ducks, that didn’t come as a great surprise. A metal-ringed Black-headed Gull was on the jetty, but reading it proved impossible. So a low-key start to the Whitlingham year, with 26 species noted before heading off. 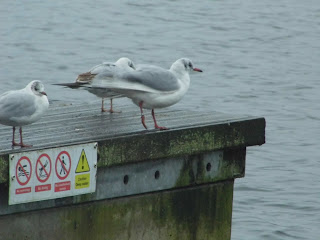