I met Adam in North Walsham, and with no particular plans we went to Felbrigg for a look round. We parked up in the Lion’s Mouth car park and headed out across the parkland. A flock of Fieldfares and two Mistle Thrushes were feeding along the woodland edge, and a bit further round a Treecreeper worked its way up a small tree. We were keeping an eye out for Nuthatches, and soon two flew past us before landing on separate trees and calling loudly. A Bullfinch and a Buzzard were both seen before we reached the stream.

Scanning the flooded meadows either side of the stream we noticed lots of Wigeon and Teal, plus a pair of Shoveler. As we crossed the bridge a commotion amongst the Jackdaws alerted us to a Tawny Owl being mobbed. Eventually it flew up to a broken off tree and the Jackdaws lost interest. We scanned the lake, but failed to see any Mandarin. There were around 60 Gadwall, including a raft of 30+ birds, plus some Tufted Ducks and Greylag Geese. 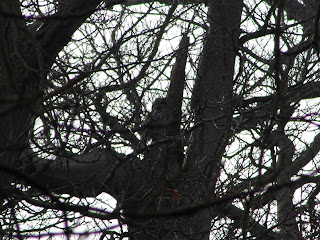 We moved on to Sheringham seafront for lunch, hoping to see Purple Sandpipers and/or Glaucous Gulls, but failing on both counts.
Posted by James Emerson