I had to drop the car in for some new tyres on Saturday morning, so took the opportunity to have an hour or so in Train Wood, the start of the Marriott's Way off Barn Road in Norwich. After a slow start it turned out to be quite a productive visit.

After listening to some common woodland birds I followed a rough path close to the river and noticed that Opposite-leaved Golden Saxifrage was growing on the wet woodland floor. This unassuming, largely green plant is fairly scarce, I had only seen it previously at Wheatfen so was pleased to find it so close to the city centre. 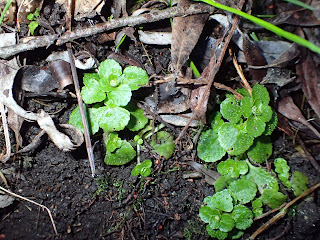 Further along I stopped opposite Wensum Park. Around 70 Black-headed Gulls were loafing, and depsite the relatively small size of the park there were at least four pairs of Egyptian Geese! A Treecreeper called nearby, and further along a Great-spotted Woodpecker was in a riverside tree. Whilst searching for the woodpecker a Water Rail flew out from the bank and into a small reedy area near the metal bridge. Despite knowing that they had been seen here before, this was a new 'outer ring road' bird for me. On my way back I saw a couple of Little Grebes on the river, which were also of note this close to the city centre.

I was also paying attention to the fungi in the woodland area, and my eye was caught by some Scarlet Elf Cups, another species I've not seen here before. Whilst looking through a nearby log pile I noticed a tiny yellowy-cream fungus growing from a decaying Alder leaf. I recognised it as a member of the genus Typhula, but wasn't sure which one. After a closer look under the microscope and some guidance from county recorder Tony Leech I was able to confirm that it was Typhula setipes, a species only recorded in Norfolk nine times previously (because of the difficulty in seeing it rather than any great rarity I would suggest). 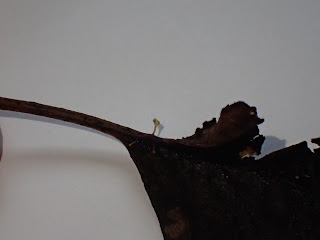 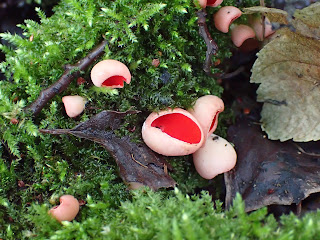