During the week I had heard that several Tundra Bean Geese had been seen at Ringland with a flock of Greylag Geese, so having been given directions to the area they had frequented I headed off for a look. I spent a pleasant morning walking footpaths in the area, but didn’t come across the Bean Geese or the large Greylag flock, so it appears that they have moved on. Whilst looking over the floodplain the most interesting bird superficially resembled a Ruddy Shelduck, but on closer inspection appears to be a Ruddy Shelduck x Egyptian Goose hybrid, a conclusion that others online had also reached having seen it earlier in the week. It was calling and displaying to an Egyptian Goose. 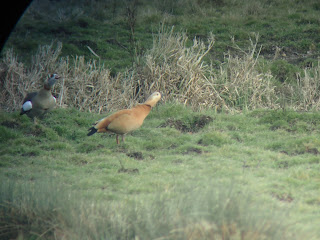 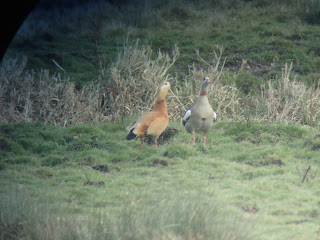 Also in the area were at least three Bullfinches, a Little Egret and a Red Kite.
Posted by James Emerson