The ongoing saga that is connecting our house to the internet is ongoing, so here is a brief catchup on recent trips.

February’s wetland bird survey was a rather quiet affair, with large reductions in the number of ducks from January. The most interesting sighting was two Little Egrets flying east over the broad, one shortly after I arrived and one a couple of hours later. A drake Wigeon was also of interest, and there were good numbers of Siskin flying around. 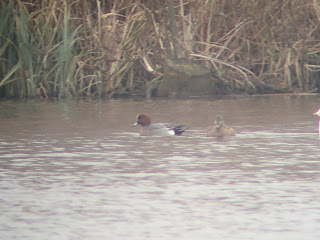 I couldn’t see the Black-necked Grebe on Thorpe Broad from my vantage point at Whitlingham, but I did see David Norgate who then saw the grebe, so it was present by proxy. As far as I know it was last seen on 14th February, having stayed for two weeks.
Posted by James Emerson