On Saturday 24th Feb I headed down to Norwich waterworks where on two of the past three days the Glaucous Gull that has been seen periodically around Norwich had called in mid afternoon. Beforehand I had a look along the river and cut up through Sycamore Crescent Wood. At the waterworks reservoir, which is only partly visible through the gate, there were the common four gull species but no sign of the Glauc. Craig Robson joined me and said that there were less large gulls there than the past few days so it was probably somewhere else. I did check Wensum Park where there was a good gathering of gulls (220+ Black-headed, and a handful of others) but no luck there either. Thetford gets lots of gulls on the roofs of a business park - does anyone know of any equivalent areas around north Norwich where large gulls go to loaf?

On Sunday morning I got a text from Gary to say he had found a drake Mandarin on the river near Whitlingham. This would normally be the sort of thing I'd go and have a look at, but I didn't, because Cathy had just gone into labour! I drove her to the hospital in the sunshine and we had a baby daughter the following day. Whilst in hospital the 'beast of the east' struck, but the midwives were a hardy bunch with many battling the conditions to get into work or staying to do extra shifts - a big thank you to them all. I don't intend to remodel the website as a parenting blog, but I mention it here as undoubtedly having a young child will affect the amount of time I spend in the field, the places I visit and who knows, perhaps even my outlook on some things.

Whilst in hospital I rationed my phone battery (it already doesn't connect to the internet) and on one of the occasions I turned it on I had a text from Justin - he had found a Coues's Arctic Redpoll at Whitlingham! Whilst I was delighted for him and pleased that a new species had been added to the site list, I did feel a pang of longing to go and see it. Still, I had more important things to worry about.

Come Saturday 3rd March and with the redpoll still present Cathy encouraged me to pop out in the afternoon to have a look. When I arrived a small group was watching the redpoll flock, but the poor light was silhouetting the birds and it was a struggle to be nail down all the relevant features. Part of the flock flew off, so I went to look for them before returning to the favoured area of Alders. By now everyone else had left and the birds came down lower. I got good views of the Coues's Arctic Redpoll, at least two Mealy Redpoll (I think three, but I never saw two similar looking birds together) and at least 10 Lesser Redpoll. My attempts at photos were even worse than normal - there will be some good ones about though, for example keep an eye on James Lowen's blog). This was my 148th patch species, so my medium-term target of 150 is within striking distance. Two from Garganey, Wheatear, Yellow Wagtail, Osprey or Firecrest would do it - let me know if you find any of those please! Whilst scanning the Alders I saw several Treecreepers, including one singing loudly. A Smew was present but I didn't see it on a quick scan and was eager to head back home. This was an excellent end to an exciting but exhausting week. 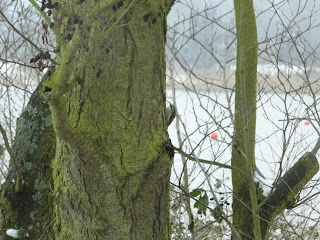 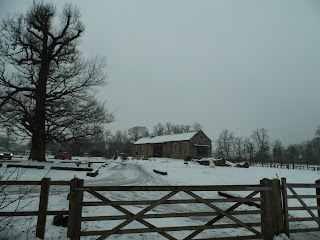