On Sunday the monthly Earlham Cemetery walk was focussed on hoverflies. We managed at least 12 species, with Epistrophe grossulariae and Melangyna labiatarum both new for me. Neither are particularly scarce, but they do require a close look to eliminate other species. I noticed a Cheilosia impressa on a buttercup flower, apparently a new species for the cemetery although I've seen it at Whitlingham and Thorpe in the past.

It was actually a very productive day for me in terms of new species, with a gall on Bay (known as Bay sucker), the beetle Tillus elongatus and Red-girdled Mining Bee all new. A sawfly on buttercup was identified as far as a Cephus sp - there are two very similar ones and apparently Benson's feature relating to the antennal segments isn't very useful, but at least I know next time to focus on the shape of the claws. 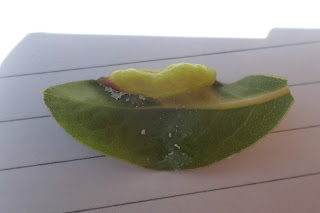 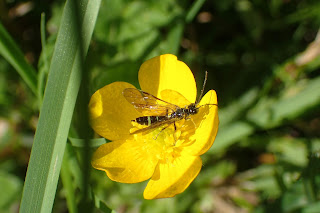 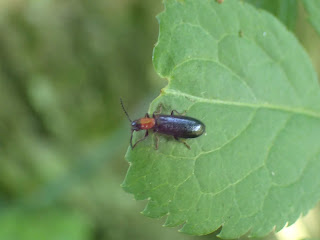 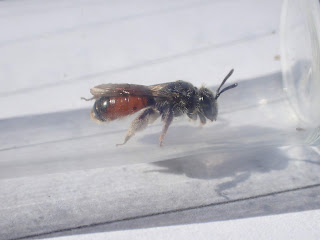 A gall on Holm Oak was also of interest. I keyed it out to genus Plagiotrochus, but it didn't really fit the discriptions of the two final possibilities in Redfern, the FSC galls key. Fortunately several national experts were familiar with them and identified it as Plagiotrochus quercusilicis. The county gall recorder has no previous records for this species in Norfolk, but that should be accompanied by two caveats, firstly that at least one knowledeable gall recorder in the county doesn't submit records at a local level and secondly that ideally new galls would be studied and bred out to provide ultimate confirmation of the identity of the causer. 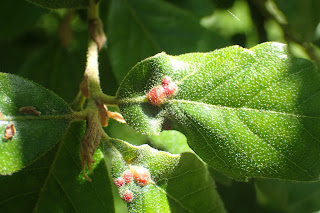