After dropping Cathy & Rose off in the city I had a free afternoon and decided to visit How Hill to look for the Purple Heron that had been seen there recently. Having parked up I called in at Toad Hole Cottage to get a ticket for the nature trail, and was told that the heron had been seen a few hours previously but spent a lot of time out of sight in the reeds. I tried to keep focussed and walk straight to the hide that overlooks Crome Broad in the far corner of the reserve, but inevitably stopped regularly due to the large amounts of insects on the Angelica flowers. There were loads of hoverflies, including Sericomyia silentis, Platycheirus rosarum and Melangyna compositarum/labiatarum. 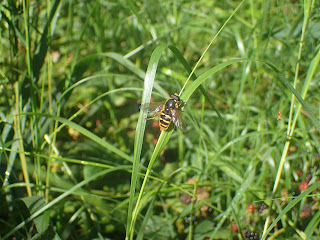 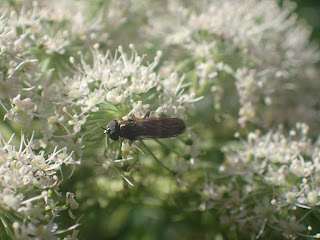 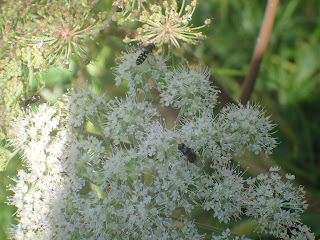 A couple were just leaving the hide when I got there, but after that I had at least 30 minutes of solitude, and 20 minutes in the Purple Heron did the honourable thing and flew up out of the reeds in front of the hide, before flying low to the left. This was only my second Purple Heron and my first Norfolk one, having seen one at Minsmere years ago. Later I was joined by several other birders, but the heron didn't show again before I left. One of them, Nathan, came back the following morning and managed to get a good flight shot which is on the RBA gallery here. On my way back I could pay more attention to leaf mines, noting a good suite of Alder species and a handful of Agromyzids. A couple of Willow Emerald damselflies were also of note. The best find was a mine of  the moth Leucoptera lutella in Bird's-foot Trefoil. This is a Nationally Scarce A species that Stewart pointed out to me at Burgh Common recently. 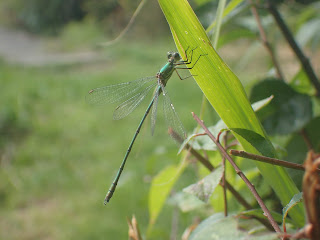 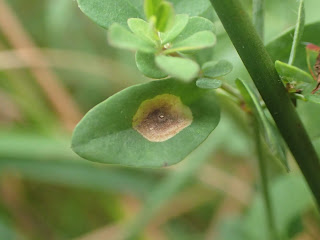