Adam & I try to get in a day birding most holidays, and decided to head down to the Brecks for this one. We opted to give Santon Downham a miss, so our first stop was by a roadside overlooking a block of forest. The weather was still overcast so we weren't confident of our chances of seeing Goshawk, but it didn't take too long before one was up. It didn't display, but instead flew back and forth a few times over the trees giving excellent views. As I stood there listening to a Skylark I realised that it was my first of the year, as was a Mistle Thrush that called and then flew off in front of us.

Next up we tried another block of forest where a feeding station has been set up in an area where Willow Tits are still present. The table was attracting a steady stream of the Blue, Great, Coal and Marsh Tits (and Dunnocks), but unfortunately we didn't see or hear any Willow Tits. A Hairy Shieldbug landed on Adam's leg whilst we waited. Eventually we decided to just walk a bit further along the ride, seeing a Muntjac and a Great Spotted Woodpecker, but not a lot else. 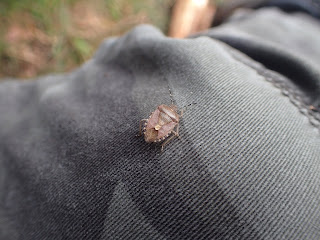 Our main target was a Kumlein's Gull that had been appearing sporadically in the gull roost at Lackford Lakes, but with a few hours before the gulls were due to start arriving we decided to go to Lynford first. We checked out Lynford Water in case there were any Goosander, but only saw common species (although the sound of a huge flock of Siskin was impressive). In the arboretum we quickly found some Hawfinch and got great views as they fed under the trees in the paddock. We were rather bemused that some nearby photographers seemed more interested in photographing Great Tits on some rather oddly positioned feeders on the bridge (oddly placed because people had to keep walking past them), but on our way back we found that most of them had just been taking time out from photographing Crossbills drinking from the flooded meadow. 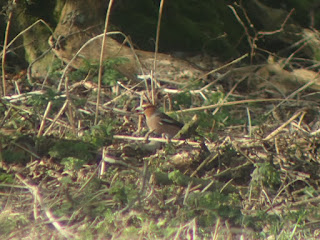 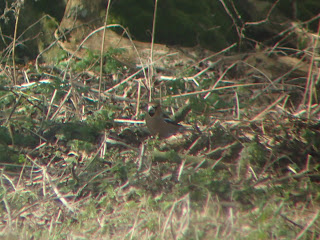 After missing a turning we eventually found Lackford Lakes, a reserve that neither of us had visited before. We had a cup of tea in the visitors centre before heading out for a look around the reserve. The first hide we called into was packed, so we moved round to the next one, which overlooked an area called the Slough. Around 400 Lapwings were roosting, along with some common waterbirds. Whilst looking through the ducks I noticed two of the 'Mallard' accompanying the Pochard had pinkish bills. A closer look revealed that they were hybrids. Recalling my Peter Scott Wildfowl book I suspected these were Rosybill x Mallard, an ID that hybrid bird guru Dave Appleton agreed with. 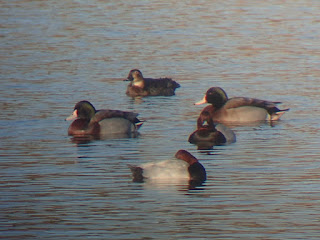 With our visit already a success thanks to the hybrid ducks, we walked back to the sailing lake to watch the gulls come in. The roost was large, but lots of the birds were Black-headed Gulls rather than their larger relatives. After an hour or so we decided to call it quits - one 1st-winter Caspian Gull had flown in but there was no sign of the Kumlein's Gull. It was a light evening and we knew it might arrive later on, but both of us needed to be back home in reasonable time. Whilst watching the gulls we were also entertained by several Goldeneye, whilst a Kingfisher, Red Kite and Sparrowhawk all flew past during our vigil.

All in all we had a very pleasant day out with some unseasonably warm weather in the afternoon - thanks to Adam for doing the driving.
Posted by James Emerson