This Saturday was the first day of the RSPB's Big Garden Birdwatch weekend, a very worthy survey that gets young people and families in particular interested in their local birds. This was the 40th year of the survey and we were fortunate in that the RSPB and Friends of Waterloo Park had arranged an event five minutes walk away, so we could take Rose along. Lindsey Chapman off of Springwatch was guest of honour and was doing some of this new-fangled instagram live v-logging type things.

We had a browse of the stalls, picking up both a coveted golden Robin and a 40th anniversary House Sparrow pin badge for Rose. Some feeders had been hung up and we saw Greenfinches on these, which was good to see as I've still not had one from the garden a few hundred yards away. Coal Tits has been seen earlier, although as it was quite busy I wasn't surprised not to see them. We went on a slow stroll around the park and clocked up 15 species, not too bad at all really. I inspected some of the old birch tree trunks hoping to find resting moths. This was unsuccesful, but I did find the distinctive springtail Entomobrya albocincta, which became my first new species of 2019. 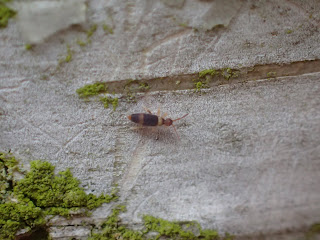 On the following day we carried out the garden birdwatch from our living room window, and in the hour we counted we saw eight individuals of six species, 2 Blue Tits, 2 Blackbirds, 1 Robin, 1 Collared Dove, 1 Woodpigeon and 1 Dunnock.
Posted by James Emerson