In December I had inspected a large stump near home that had a cascade of obvious bracket fungi on (I had first seen them whilst driving past). They appear to be a Trametes or something similar, but I wasn't sure exactly what. Recently Neil Mahler also went and had a look, and despite some microscopic checking we still aren't really sure what they are, but Neil had also seen some Splitgill (Schizophyllum commune), a type of gilled bracket fungus on the same stump, so I went and had a quick look after work. 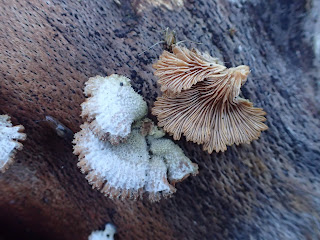