Near the end of the month Adam & I had set a day aside for birding. There had been an arrival of Wrynecks and Whinchats along the east coast a few days previously and also several sightings of Scarce Blue-tailed Damselfly on the pools at Winterton, a species I've never seen, so we decided to head to Horsey and then walk to Winterton and back.

We arrived in light drizzle, which was eventually replaced with bright sunshine by the time we left. Despite the seemingly favourable weather conditions there were not many migrants about. Several local Stonechat families were seen, as was a big mixed Linnet/Goldfinch flock, two Whinchats and a few warblers. Surprise sighting of the day went to a Green Sandpiper that flew up off one of the pools, and a Pied Flycatcher was heard but not seen within some willows.

Unfortunately there wasn't much better luck with the Damselflies. There were lots of Emerald Damselflies, but the only other damsel found was a female Blue-tailed, which proved a bit of an ID challenge because it looked particularly small and dowdy. I assumed it was teneral, but actually some old females look like that. Some Donacia beetles were also noted on the pools, although I'm never completely convinced I've keyed them out correctly so I still need to double check the ID. 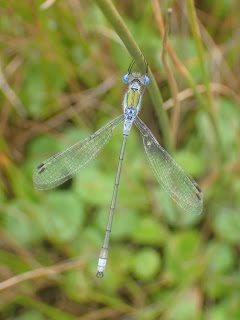 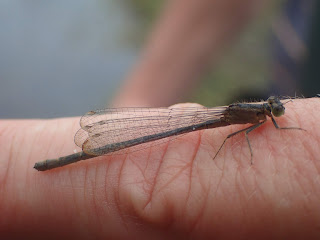 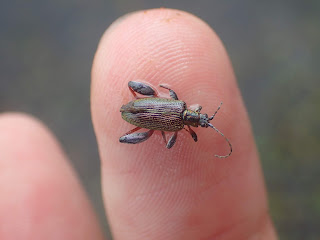 The highlight of the visit therefore was the leaf mine of the Nationally Scarce B micro moth, Phyllonorcyter quinquegutella on Creeping Willow. Back at Horsey Mill car park we stopped for a drink and had a walk around the garden, seeing several Rhingia campestris hoverflies. 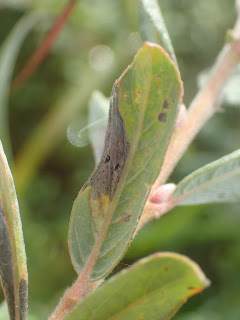 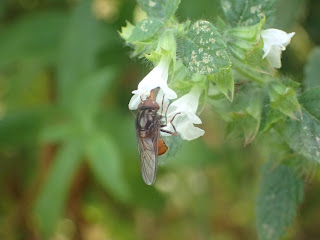