Our last visit to Minsmere had been fairly short, so we decided to visit again and spend a bit more time on the reserve. After lunch we headed down to the north bushes, where we were treated to views of both Pied and Spotted Flycatchers, at one point in the same tree until a Robin started chasing them out. There were fewer bees than our last visit (although still quite a lot of Bee-wolves), but a Silvery leaf-cutter bee (Megachile leachella) was a fairly common new species for me. 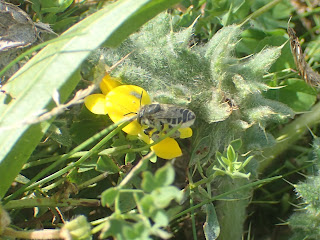 Further along the path I was keeping an eye out amongst the trefoil in case a late Six-belted Clearwing was still around when I heard a squeak. Trying to see where the noise had come from I noticed an Adder! Neither Cathy or Rose had seen a wild snake before, so I managed to draw their attention to it. I expected that it was basking and would soon slither off, but it actually moved further into view. I then saw what was going on - it had just caught a rodent! It was determined to eat it, and we were able to stand at the edge of the path and watch as it stretched its mouth over the vole(?). Once it had more than half in its mouth, and presumably therefore a good grip, it turned round and slithered off into the undergrowth. I've been fortunate to see Adders and Grass Snakes quite a bit since I was a kid, but have never witnessed this before so I was delighted, and even more to be able to share it with my family. 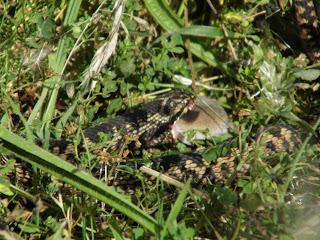 Reaching the beach Cathy struggled manfully to push the pushchair through areas of loose sand, developing a good technique by the end of it! On the way we got close views of a Dartford Warbler near the tank traps, and after searching a couple of patches of Restharrow I found a new agromyzid leaf miner, Liriomyza cicerina. Dune Villa (a type of Bee-fly) and a Sharp-tailed Bee sp were also noted here. We continued our lap back to the visitors centre, having seen a excellent range of species. 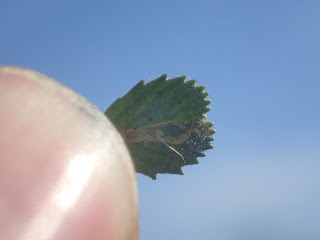 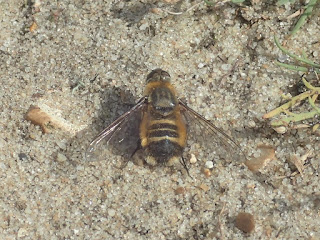 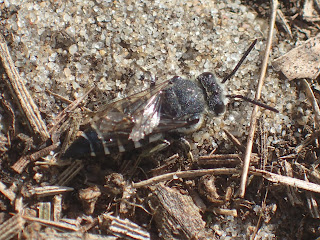