Having the morning free, me & Adam got a lift to Potter Heigham to walk the back of Hickling Broad. We had fairly low expectations, but made a good start with a first Common Tern of the year fishing in the area around Swim Coots. We stopped for a while at the hide overlooking Rush Hills, finally finding a Little Stint along the back bank. A bonus was three Little Gulls, presumably stragglers from last weeks influx.
Further along the path, a rather surreal moment, when what I initially thought was a bulky-looking and rather dark Marsh Harrier turned out to be a Raven! Thinking it would be rainy, we hadn't bothered bringing decent cameras (typical) and after a minute or so it flew off. Most of the time I would have been stunned by the idea of a Raven in Norfolk, however one (presumably the same bird) was seen near Happisburgh the previous day, so I guess it was right place right time. We scanned regularly for the rest of the walk but never cought sight of it again.
We were hearing Sedge Warblers with increasing regularity, but failed to see any. better luck was had with our first Grasshopper Warbler, patience paying off with a brief flight view as it moved in an area of short trees. A second bird further round proved too elusive. We finished with chips at Potter Heigham, where I noticed a Rook flying overhead had an extended upper mandible, giving a Chough-like curved bill! 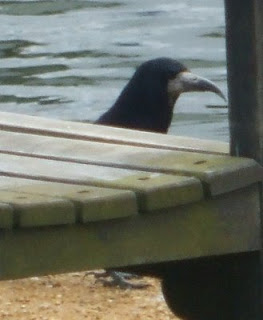 Year list now 164 species.
I'm now off to Scotland for a week, fingers crossed for some good birds!
Posted by James Emerson