Seeing how busy Whitlingham had been the day before, I planned an evening visit to avoid the crowds. Walking across Trowse Common a Kingfisher flew in a wide arc around the river. Some of the Tufted Ducks were already putting their heads into their wings, so I probably got there a bit late! There was a good range of ducks (no Garganey though); Pochard 6, Teal 2, Shoveler 4, Gadwall 12 and 140+ Tufted Ducks, along with a group of 5 Little Grebes. 5 Cetti's Warblers were singing, one of which we got a glimpse of. A lone Swallow flew over the east end of the broad. By the time we got to the far end, the sun was beginning to set. As we walked past the little Broad, four small bats (probably Pipistrelle) were hunting insects over our heads. 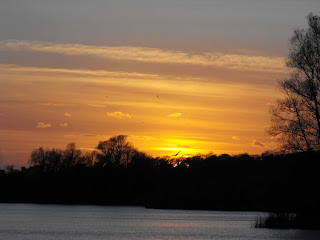