After the previous days lack of birds, we took the train and Coasthopper to Titchwell. We quickly found the male Red-crested Pochard from the first hide, along with a few Grey Plover. The reserve was getting busy, so we went down to the beach, where a seawatch added Sandwich Tern and little else! A walk up to Choseley was almost made pointless as a couple walking the coastal footpath scared everything from the hedge and pad. Eventually the birds started coming back, a few Yellowhammers and Corn Buntings drinking from a puddle in the road. An unfamiliar call alerted us to a Lesser Whitethroat in the hedge.
.
Deciding to head for somewhere less crowded, we got off the bus at Kelling and walked down to the beach past the water meadows. Walking along Weybourne Camp I failed to see Wheatear for the umpteenth time this spring, but did manage to seem the Nordic Jackdaw, the first one I have recorded, although I can't say I've really been actively looking! As we reached the beach car park at Weybourne, a last scan for anything other than rabbits or Woodpigeons paid off as I picked up a distant Ring Ouzel. A stiff walk to the main road saw us get to the bus home with about a minute to spare!
.
As the trains are still 2 hourly, we spent an hour in Sheringham taking pictures of Turnstones and Black-headed Gulls. The beauty of digital cameras over film, is that I can delete all 122 pictures of the back of a Turnstone.
. 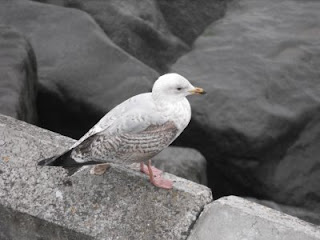 This gull caught my eye, mainly because of the yellow and black beak. I'm presuming it's a between-plumages Herring Gull, but if anyone wants to offer me anything rarer then please do!