Seeing that the country was being flooded by Little Gulls, I went down to Whitlingham in hope rather than expectation. As I'd suspected, the country park was full of families and dog-walkers, suffice to say no sign of any Little Gulls. As it was, 14 were reported from Colney GPs, so I wasn't far off. The day wasn't a complete failure, the first brood of Egyptian Geese chicks were on the Little Broad, and the 2 Black Swans were doing a brief courtship of head raising and bobbing. Further round I found a hybrid goose that me & Adam first saw last year. We think it's parentage is likely to be Lesser Whitefronted Goose x Barnacle Goose. 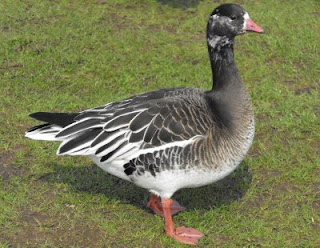 Around the back of the broad the Willow Warbler that started singing a week ago was still in the same group of trees, and back in Trowse a Kingfisher flew out of a buddleia and downriver. The next day I found to my despair that after I had left, a pair of Garganey were located that evening at Whitlingham by one of the punks. Darn it!