Determined to make the most of my last few days before starting my new job, me & Adam got the bus to Brundall. We were walking towards Strumpshaw when we noticed a Grey Heron looking in a garden, which stabbed down and caught a rat! It was quite a struggle, with the rat getting free at one point, but it was quickly recaptured. A couple stopped their car and looked very excited. It was only when it emerged they thought they had seen a Crane that we understood why!
. 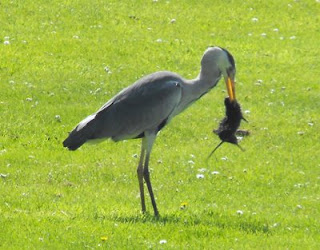 Strumpshaw was fairly quiet, a few butterflies and a male Blackcap were seen around Lackford Run. From the tower hide a large number of Shoveler and a few Pochard were as exciting as it got. Seeing Ferruginous Duck on the sightings board at the reception hide, I asked the volunteer warden when it had been seen, to which he replied early morning. By now Adam was at the window and had found it! Unfortunately it is ringed, blue or green depending on who you believe!
Buckenham had been largely emptied of Wigeon, but we did find a party of 5 Yellow Wagtails. A paler bird was presumably a female, but they flew off and we couldn't relocate them. A few waders and Sedge Warblers later we returned to Brundall and home, a nice day out but little reward.
Posted by James Emerson