Me & Dad went out on the motorbike, starting at Upton for Grass Snakes. It took a whle to find the first one, but we ended up seeing 8, getting photos of one basking on the path. otherwise the reserve was quiet, 2 Marsh Harriers, a Barn Owl and a late flock of Fieldfare the best birds. 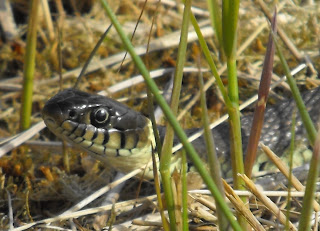 After lunch, we headed to Horsey to have another look at the seals. Despite the beach being quite busy, they didn't seem bothered by the people. Still no Wheatear for me, but four Swallows flew through going east. A number of Stonechats were along the path, and a flock of pipits at Waxham Holiday Park were too far away to ID.