Dragging myself out of bed, I made my way down to Whitlingham about half-pace. Along the Little Broad a Lesser Redpoll was singing in the alders and giving good views. A singing Reed Warbler was only seen briefly, and took a call recording for me to be confident it wasn't sedge! I must find some way of learning bird calls properly. The Egyptian Goose fledgelings have all survived so far, and a brood of 8 Mallard chicks had joined them. Both broads were devoid of ducks (6 Tufted, 9 Gadwall), but thats not too surprising considering the amount of dogs running around off leads. I imagined the following conversation, although it probably happens regularly. "Shirley, does that Conservation Area, Dogs On Leads sign apply to us?" "Don't be daft Bobby, we own a goat" "Oh yeah hur hur, silly me"
I counted five singing Cetti's Warblers, and four Sedge Warblers (seeing my first of the year). Hearing dogs barking loudly, I looked across the river where police were talking to the owners of the houseboat with the out of control dogs on it. I wonder if people have complained about them? A scan of the new workings turned up the missing 100-odd Tufted Duck, along with four Shelduck. Still no sign of any LRP though.
Continuing round, a flock of 15ish House Martins, 2 Swallows and a Kestrel flew over, a Grey Wagtail flew along the shore and the pair of Black Swans were on the slipway. A Gadwall looked like it may have a few farmyard mallard genes in it. A Blackcap was eating insects out of Blackthorn flowers, and a couple stared at me for taking pictures of a Treecreeper that they obviously couldn't see. I came home and had one of my Scottish beers, Harviestoun's Black Engine Oil. Described as viscous, chocolatey and bitter. Oh yeah. 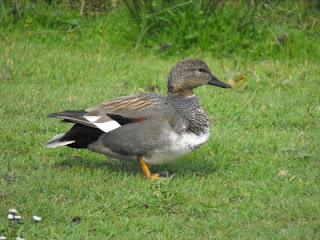