As it appeared that the world hadn't ended (maybe 3rd time lucky Mr Camping? Or will you just be quiet now?) Dad & I went out for a drive around North Norfolk, looking for orchids and dragonflies. After a brief stop to look for dragonflies, we moved on to Swafield to try to see some Early Purple Orchids I remembered from when I lived in North Walsham. Failing to find them, we then moved onto Overstrand, where we were hoping to find some of the red form of Early Marsh Orchid. We drew another blank here. I have a hazy memory of seeing them from some steep wooden steps, but maybe the cliff has eroded, or I could just be losing it. The sky had clouded over at this point, which enabled me to notice a Gannet circling out to see, the white almost glowing as it turned in the light.

Next stop was Holt C.P. At the pond we saw a male Broad-bodied Chaser and a number of damselflies, including the blue-form female Variable Damselfy pictured below. The strong winds meant that no dragonflies were flying on the lowes, and there were no orchids (plenty of Round-leaved Sundew though). We did see a Green Hairstreak at my third site this year, which was good. 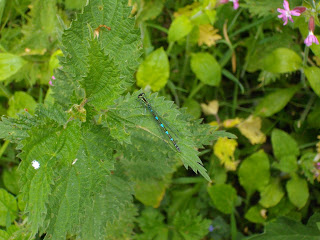 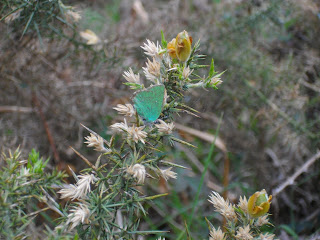 After a pub lunch at the Royal Oak in Bintree we headed to Foxley Wood to resume our hunt for Early Purple Orchids. The only orchids around seemed to be Common Spotted, however we did also see two flowering Greater Butterfly Orchids, one protected by a wire cage and this one. I've seen Lesser Butterfly before, but this may well be a new one for me, so a nice way to end the day. 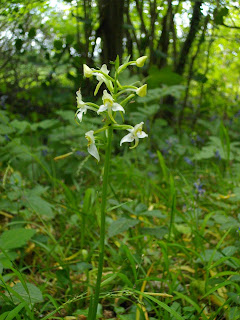