A lovely sunny evening seemed a good opportunity to go for a drive around some of the nearby villages (i.e. south of the city). The first stop on our voyage of discovery came after going over a ford. Having slowed down to avoid a Pied Wagtail in the road, we spotted a Grey Wagtail right alongside the car. Pulling over we watched as it flew over to its mate on the other side of the river, and they treated us to a midge-catching masterclass, jumping up and catching them in mid-air. We then had to wait as 7 Mallards wandered fown the road, rather amusingly going into the drive of a B&B!

Further along we watched a "singing" Red-legged Partridge and took some photos of the ruins of a church before watching hirundines over Shotesham Common. Turning back towards Norwich I saw a Little Owl hurtle past. It flew onto a telegraph post nearby, so we drove a little bit closer then stopped for a look. A Blackbird then mobbed it, causing it to fly to the post right near our car. In fact, it was so close that to get a photo I had to hang out of the car window, hence the white in the bottom right of the picture. It may clean up in photoshop if I get round to it. 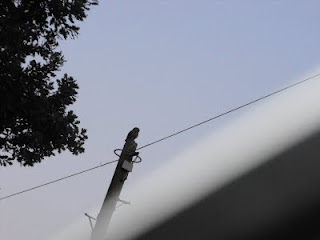 Before going home we decided to drive down Whitlingham Lane as I still need Barn Owl for the patch list this year. Part way down we stopped to watch bats over the meadows. Seemingly somewhere in size between Pipistrelle and Noctule, I hope they could turn out to be Natterers, but I will have to go back with the bat detector to check this out. Further down I saw another owl flying, and drew attention to it in my own reserved style (SH*T! IT'S AN OWL!). Pulling into the Little Broad car park we heard two Tawny Owls calling to each other, before our one flew back over Whitlingham Lane and towards the Lime Tree Avenue. Patch gold, and a marvellous evening close to home.