WHITLINGHAM: Week 19 - Not as bad as it looks

I hadn't visited Whitlingham during the week as a cold had completely zapped my energy, so I was looking forward to seeing what had arrived since my last visit. John had kindly emailed me to say he had seen a 1st-summer Little Gull on Wednesday evening, whilst I would be interested to find out which direction the three Night Herons were flying when seen/heard at Strumpshaw on the same evening.

Upon arriving to a long row of cars parked along the lane (which is now legally a freeway, although as the police dont have the time to come and impose tickets its all a bit pointless) I presumed that the C.P. would be heaving. In the end it was no busier than normal for a sunny day. The great broad was quiet, 27 Lesser Black-backed Gulls and 3 Herring being the only birds of note. Swifts were screeching overhead, and the nettles along the riverbank were full of Common Blue Damselflies. 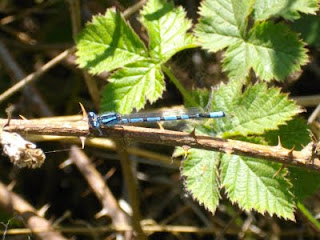 Birdsong was muted, but amongst the Whitethroats and Blackcaps I found a skulking Lesser Whitethroat (not singing) and further round in the conservation area a Garden Warbler. Last year GW was my 100th bird, this year I've only made it to 92. Mind you, there are still anumber of "common" birds I should get (e.g. Red-legged Partridge, Bullfinch, Grey Wagtail) and hopefully a few migrants still. I had been hoping for Bar-tailed Godwit, but no joy. On the rest of the way round I saw my first Banded Demoiselle of the year and a Common Sandpiper flew downriver. The area of scrub that was cleared near the Little Broad has been turned into an area for archery (there is already one, why do they need two?). Presumably this project took priority over both concreting the Little Broad and building Badminton courts and the giant tire swing on the Great Broad island.

Whilst at Whitlingham I found out about the Collared Flycatcher, but on the way home I was buoyed by my own black-and-white bird, when the partially leucistic Blackbird that frequented Chapelfield in 2009 made a surprise re-appearance. 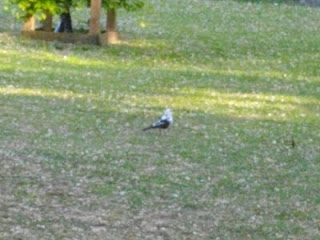 I know that this picture is worse than my usual poor standards, but it was chased off by a small child. Said infant had ignored other birds, adding further anecdotal evidence that birds with pigmentation mutations suffer from increased predation.
Posted by James Emerson