After a fairly quiet August (so far) I didn't take any tempting to go to Graffham to see the White-winged Black Tern that has taken up recent residence. Gary & I arrived to see a few birders on site, and took advantage of a close Black Tern to get some pictures. It wasn't until it flew off that the comments around us made us aware that some individuals thought it was the White-winged Black Tern. The bird we were after was actually flying around with some Black Terns on the far edge of the reservoir. Eventually they made their way round to the sailing club, and the White-winged Black Tern treated us to some close fly-pasts before settling on the pontoon. After giving far better views than 90% of vagrant species* it set off on another lap, and we took our cue to head back to Norfolk. 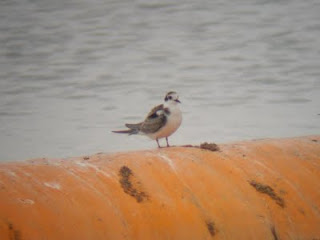 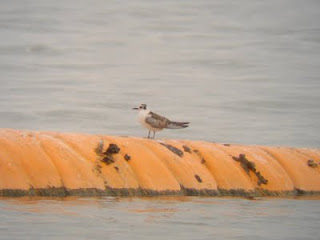 After getting stuck in traffic near King's Lynn, we headed inland then north to Titchwell. We had a look through the waders, where Gary earned himself hero-worship status from a nearby birder by locating three Curlew Sandpipers near the back of the freshmarsh. Whilst this birder told his friends how he could hardly see the bird, let alone an eye-stripe, another well-meaning birder committed a cardinal sin. He tried to express his doubts about a recent Buff-breasted Sandpiper sighting (on-site this was changed later to Dotterel, I'm not sure on what basis) but insisted on only calling the bird a BBS. Don't do it folks. Maybe use acronyms when writing to save time, but not when speaking. You have time to say "Buff-breasted Sand(piper)". What if we think you mean Broad-billed Sandpiper? Or Big Balled Stint? More importantly, it justs sounds really really silly.After calling in at Stiffkey campsite carpark (a couple of Spoonbills on the saltmarsh), we went to the Dun Cow, hoping to cash in on the wader bonanza around the coast. The best bird was pretty much the first one, Gary spotting a Yellow Wagtail get up from near some cattle and fly west. I picked up a Hobby soaring above us, and at one point four were circling together, a lovely summer sight. A kettle of gulls over Cley seemed to be highlighting where we should be, so we finished the evening in the central hides. We were treated to some very close Common and Green Sandpipers, whilst further out six Spoonbills slept, and amongst the waders were one each of Little Stint, Curlew Sandpiper and Wood Sandpiper, plus three probing Snipe. The whole lot was put up by a marauding Sparrowhawk, and some Swallows flew into a nest they had made inside the hide! Always a great place to end a days birding.

* This, like pretty much any unreferenced statistics on the blog is a completely made up stat.