With north-easterly winds I had been contemplating getting up very early and going seawatching, but a late night put paid to that idea. Instead I contented myself with a trip to Whitlingham in the hope of some windblown Scoters. As it happened the best bird of the day was a Common Gull in with the Lesser-black backs, which a quick notebook check suggests is my first August record here. There is still an uncut cereal field at the top of the lime tree avenue, so when that gets cut it could push some Red-legged Partridges into the meadows, but I'm struggling to amuse myself here at the moment. Plantwise some Hops are growing near the river. A large beetle wandering along the path was a Great Diving Beetle, a normally aquatic species, but one I have seen on land before. One of the Whitlingham Lane residents told me he'd seen a Grass Snake on the lane in the week, which would be good to see locally. And thats about it. 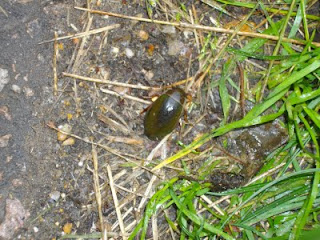 I know it doesn't look too spectacular here, but they are a pretty hefty beetle, with a good nip too.
Posted by James Emerson