Still no sign of a good Tern or Osprey, or anything good birdwise really. Of the resident stuff a Marsh Tit was calling in scrub near the river and a family of recently fledged Pied Wagtails were catching flies along the shore of the Great Broad. A couple of fresh looking Small Tortoiseshells were the pick of the butterflies. Poking about in the grass I disturbed a Mint Moth, and found Meadow Grasshopper, Field Grasshopper and Long-winged Conehead (which sounds more exciting than it looks). Conehead literature suggests it is best heard with a bat detector, but this is the second year I've found them at Whitlingham by ear, maybe they're getting louder?! 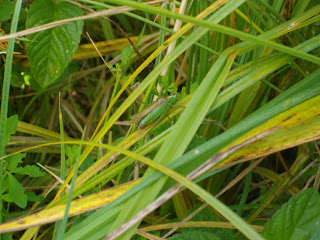