We spent the morning at Natural Surroundings. I had let them know that we were coming in advance and Andrew had kindly agreed to put the moth traps out for me, so we had a large number of moths to sort through. There were around 40 species, the most spectacular being a Red Underwing. There were large numbers of Setaceous Hebrew Characters and Shuttle-shaped Darts, and some of my favourites like Black Arches and Swallow Prominent. There were also several burying beetles, some black and some orangey-red and black striped ones. Whilst we were sorting through the traps we showed interested visitors some of the catch and talked about moth trapping. As it was Sunday they also got the resident Hedgehog (Cookie) out to show. 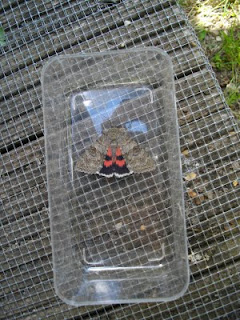